“You’d have to be living under a rock not to know that the ocean is filling up with plastic,” says environmental activist Paul Hellier. “So rather than waiting for politicians and large companies to act, let’s start talking about what we as ordinary citizens are going to do about it.”

“The purpose of Fair Food Forager is to encourage businesses to increase their commitment to sustainability and show them that there are plenty of things they can do that are really simple and don’t necessarily have to cost them money,” he says.

“For example, by donating its food scraps or coffee grounds, a business can probably reduce its rubbish output by half. Or maybe it could be something like putting plastic straws under the counter and not putting them in every drink that they serve.”

The Fair Food Forager app was initially launched in Paul’s home community in the Illawarra, but has now been taken up by communities across Australia and, indeed, the planet. There are currently 6,000 businesses listed on the app and a searchable website – most of them crowd-sourced or vetted by partner agencies.

“The app is now in about 20 countries, with Australia, the United States and the United Kingdom providing the bulk of the listings,” he says proudly. “But parts of Asia and New Zealand are starting to come online, which is really exciting.”

Apart from appointing a number of ambassadors in Australia, the UK and Asia, Paul has also forged links with environmental groups such as Surfrider Foundation Australia and The Sustainable Restaurant Association in the UK. “It’s amazing when you consider that we first launched with 15 venues in Wollongong and two in Sydney,” he says.

As a keen surfer and former council lifeguard, Paul had seen the devastating impact of ocean pollution first-hand and knew that he wanted to do something practical to curb our wasteful behaviour. 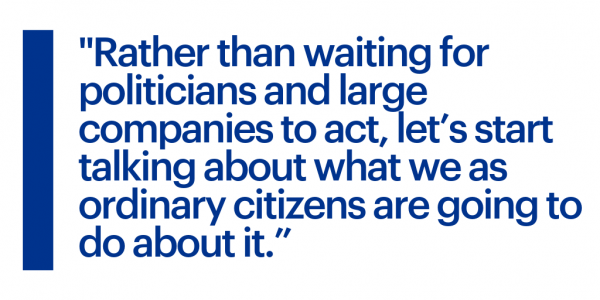 “I’d been cleaning up the local beach for about 15 years – picking up plastic and finding it all there again the following day,” he says. “Then one day I found a turtle that had died because it had swallowed plastic wrap. I started to think that I needed to do more than just pick up rubbish.”

According to Paul, Fair Food Forager not only helps the consumer make an informed choice about where they spend their money, but also provides an environmental benchmark for the food industry.

Each of the 6,000 businesses listed on the app is rated according to 13 environmental criteria such as use of sustainable seafood, efforts to reduce the use of plastic and whether vegan and vegetarian options are available.

Consumers can quickly assess a business based on the number of icons listed next to the name of a cafe, restaurant, grocery store or specialist food outlet.

“Nothing on the app is about being perfect,” he says. “It’s about encouraging businesses to increase their commitment to sustainability.”

Over the past four years, Fair Food Forager has become a global enterprise and an all-consuming passion for its founder, who clearly relishes the opportunity to connect with like-minded people.

But Paul Hellier says his essential motivation for continuing the work remains the same. “I just care about the environment and animals,” he says.

A Legend of Help - Ian Kiernan