“To know that a little idea we came up with while we were sitting on the couch was able to bring a smile to a kid who had gone through a pretty horrible time meant everything to us.”

Kate Armstrong is a business owner from the Gold Coast, QLD. She’s also the single mum of two “little elves” who last year made sure that thousands of children in care received Christmas presents.

The idea was based on a chat she had with her nine- and six-year-old sons late in the year.

“It’s just the three of us and we don’t want much but we’re so lucky compared to other families around the world,” she says. “We had a bit of a chat about how lucky we are and the boys decided that they wanted to do something to help kids at Christmas.”

They didn’t know it at the time, but that moment was to trigger an outpouring of seasonal giving from across the community.

Together, Jack and his younger brother Haydon came up with a plan to donate Christmas presents to disadvantaged kids. The wheels were set in motion on the proviso from their mum that the boys had to be involved with the organisation of the charity idea. Jack came up with a name - the Little Elves Project - and there was no looking back.

Kate arguably has her hands full enough as it is, with a business of her own to run and both sons diagnosed with Asperger’s syndrome.

“They’re the polar opposite of each other, you couldn’t get any more different if you tried,” she says of her sons. “Jack is relatively quiet and very sensitive and Haydon is like a whirlwind of noise and energy. The one thing they do have in common is they both love helping other people.”

Her evenings became Little Elves time and she soon partnered with GIVIT, a not-for-profit that connects those who have with those in need, so that she could be sure the presents would go to good use. She and the elves - as her sons became known - started planning a fun day, inviting the public to a local golf course venue that agreed to host the event gratis. Kate persuaded the local radio station to get on board and Jack and Haydon spread the word at school, putting up posters about the gift drive. 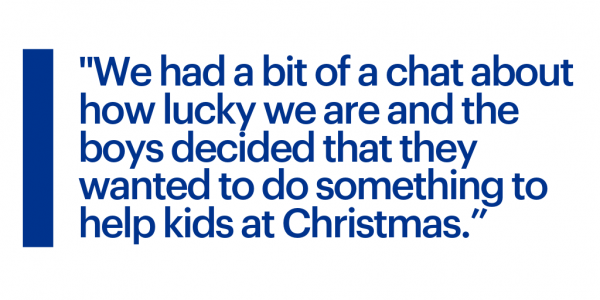 “I did as much as I could between work and the boys and we would have regular meetings about where were at. They were constantly involved,” says Kate.

“We had our fingers crossed that people would actually show up. I had mental pictures that it would just be me and my mum on the day,” she remembers.

When the big day arrived, it poured with rain. “I was so worried that I had promised something that we couldn’t deliver. And the boys were so worried because it was raining,” she says.

They needn’t have panicked. What started out as a slow trickle of presents became a steady stream, and as the morning went on, hundreds of donated gifts began piling up under the elves’ special Christmas tree.

“We were amazed that more and more kids just kept turning up,” says Kate. “Originally we said, ‘If we can get 500 presents, that would be amazing.”

It was a day of kids helping kids and the weather was forgotten. When the final present had been donated, the elves counted their Christmas haul.

“We had 2500 presents. I just couldn’t believe the response,” says Kate.

The avalanche of gifts meant that the elves were able to give Christmas presents to every child in care on the Gold Coast, as well as to those in Toowoomba, Roma and beyond.

Jack and Haydon were given the school citizenship award, a proud moment for Kate, who hopes to instill a sense of charity in her sons and “raise two little boys to be decent members of the community.”

“We were blown away at how far-reaching our project was,” she says.

The Little Elves are at it again this year. The target this time round is a massive 5000 Christmas gifts for kids in care.

After their first success, Kate remembers Jack telling her that he couldn’t believe how many people had helped.

“It was your idea,” she replied. “And your idea means that 2500 children are going to have a present this Christmas.”

A day in the life of a CVA volunteer