There are few things Danielle Weymark has asked for in her life. Now, as a disabled mother of three children under three, she is learning to ask for help, but it hasn’t come naturally for the headstrong para equestrian, from Mudgee, NSW.

When she was 14 months old, Danielle contracted meningococcal disease and, with her life in the balance, was admitted to intensive care, where she stayed for months. Doctors were forced to amputate her left arm from the elbow, her four right fingers and her one remaining toe, which was then attached to her hand to allow gripping movements.

Scores of operations, years of occupational therapy and buckets of determination and hard work have meant that Danielle now leads as independent a life as any woman in her 20s.

Becoming a mother to two-year-old twins and an eight-month-old baby has thrown new challenges at Danielle, who has learnt to nurse, change nappies, feed babies and cope with everything about new parenthood without the dexterity most of us take for granted.

Her partner, Mat, and mother, Leanne, have been invaluable to her.

“We worked in a really strong team in the early days. In the later stages of my pregnancy with the twins, everyone helped out. I couldn’t drive because I was too close to the steering wheel with my belly.”

When the twins were born, Mat, who owns his own mowing business, stepped in to do the baby feeding and nappy changing while she recovered, post Caesarean.

“It was like a little factory line,” she laughs. “I ask for a fair bit of help from Mat now. He’s really good about it.”

But it was a moment far earlier in her life that shaped the woman Danielle was to become.

In a wheelchair on and off throughout her childhood, her mum took her to the Riding for the Disabled Association when she was eight years old and from there, her love of horse riding blossomed.

“I wanted to be more independent and do more than just being led around,” she says, remembering how she began her journey to become a competitive rider.

As a teen, she dreamt about specially-designed horse reins that allowed her to have more control given her disability.

“Thankfully, when I woke up, I remembered and I drew it on a piece of paper. I showed it to mum and we had a saddle maker make them up.” 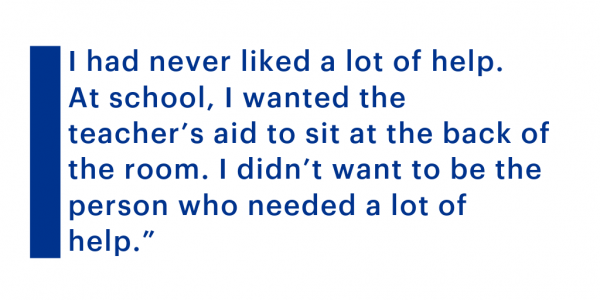 Perhaps the biggest turning point came aged 16, when the Violet Foundation sponsored her first horse. It was an act of generosity that helped her to become a successful para equestrian and riding teacher, with five horses in her stables.

“It’s more than a hobby, it’s more than a pastime. I don’t think I could live without my horses now. My first horse, Mikey, was more than perfect for what I needed. He was very naughty, but he taught me a lot of what I know now. He’s still with me to this day in the paddock,” she says.

As she watches her children grow, she hopes that horses will be a big part of their lives, especially that of her son, who has autism. With her competitive equestrian career on hold, she looks forward to being able to help disabled and less advantaged children through horse riding.

“My kids are going to grow up around animals and horses,” she says. “It would be really good for them to be around people who are less fortunate than themselves.”

Giving back to the community - Obed Kharwin