“I went into autopilot. You sort of separate yourself from the fact that it’s your cousin, a loved one, someone you care about a lot. This was just a person who was in desperate need of help.”

For Dean Cropp, the scuba diving emergency in a remote part of the Great Barrier Reef off Cape York was only heightened by the fact that it was a member of his family who badly needed help.

“We’d been diving down to about 18 metres and we were slowly coming up. We had no idea what had happened,” the underwater filmmaker and ship’s captain, from Sydney, NSW remembers.

“I looked up and saw him on his way back to the boat. The next time I looked up, I could see him at the back of the boat, but his arms and legs were hanging limply straight down. I knew straight away that he was unconscious.”

He and his father immediately began a practised first aid response, putting their relative into the recovery position and administering oxygen.

“I pumped him full of oxygen, as much as I could, and tried to look after him and just wished he would wake up,” he recalls.

Next went a radio call to the emergency services. A medivac helicopter from Townsville couldn’t land on or winch from their small boat, so a nearby cruise liner diverted and acted as platform for the medical crew.

After what appeared to be an initial recovery, Guy’s condition worsened and he went into arrest twice on the flight to the hospital. He was put into an induced coma and Dean and his father were told that things were touch and go. It slowly emerged that the accident had left Guy with devastating neurological damage. 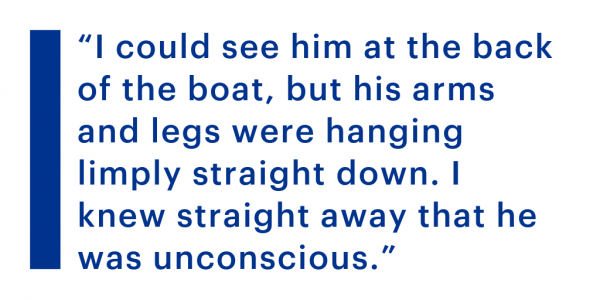 “He was quadriplegic at that point. But the night I got there, he wiggled his toe a couple of times. There was every chance he’d walk again,” says Dean. “I saw that he’s going to need heaps of help from us, but he’s also going to really have to really fight to get back the adventurous and independent self he was.”

Fast forward ten years or so, and Guy, who is now an incomplete paraplegic, is able to walk with canes and spends three months of every year on Dean’s yacht, the Barefoot, exploring the Coral Sea, Vanuatu and beyond. It is partly down to Dean’s determination to always include his cousin in his ongoing adventures that Guy can keep exploring the ocean, as he always loved to do.

“He’s slowly got more and more mobility back and more and more confidence. As soon as he was able to hold himself using his arms, I started harassing him to come out on the boat,” says Dean. It turned out the most stable place on board for Guy to sit was the skipper’s seat, so he has become the helmsman on many of their sailing trips.

“All these years, we’ve slowly, step-by-step moved up to the point where he’s pretty much back now, bigger and better than he was when he was 17 on that expedition with my father. Now, we’re going and exploring our own places.”

On the ocean, Guy’s disability is forgotten.

“If you get on a rocking boat with a pitching sea, we’re all having to hold on to everything. In some ways, the boat is a great leveller because when we’re rough seas, Guy gets around the boat as well as we do.”

They took an underwater drone on their most recent expedition, allowing Guy to follow their dives from a screen aboard the boat.

“He comes with us remotely, it’s like having him down there,” says Dean. “He’s right there with us, following the sharks around, seeing the turtles and the fish and the shipwrecks. It’s awesome.”

Guy also free dives, swims and, when at home in Sydney, takes a smaller boat out for solo sails on the harbour.

“Sometimes he gets a little bit disheartened by his situation and I tell him, ‘You do so much more than a lot of able bodied people. You get out and just do it.’ I’ve always believed that he can do everything by himself. I haven’t allowed his disability to stop him.”

The two plan to keep exploring remote waters on their annual adventures for as long as possible.

“I never think, ‘Hey, I’ve got to help Guy.’ Actually, I’ve probably haven’t been very accommodating to his disability, because I don’t treat him differently,” says Dean.

“I’m enabling his addiction to adventure,” he laughs. “I’m not letting it die.”