“I think I have always just naturally helped people and thought of other people before myself,” says Grace Allison.

Seven years ago, Grace, a full-time personal trainer who lives on the NSW Central Coast, walked into CKO, a Muay Thai, kickboxing and boxing gym in West Gosford. There, she met the owner, Maurice Cooper. “He said, ‘Come back next week’, and I did and I haven’t left. He hasn’t got rid of me yet.”

Maurice began training with Grace. Her love of the sport led to daily kickboxing sessions and, with Maurice’s encouragement, she went on to become a martial arts fighter and teacher.

In 2018, Grace and Maurice became aware of a program based on kickboxing movements called KOPD – Knock Out Parkinson’s Disease. Developed by a kickboxing trainer with Parkinson’s, it worked to help people with the disease improve their strength, balance and endurance.

The all-ages, non-contact and exercise-based program was important to Grace as Maurice has Parkinson’s, a degenerative disorder of the nervous system and the second most common neurodegenerative disease after Alzheimer’s.

Grace and Maurice, who Grace calls “Boss”, took a course in the program, learning how to tailor their years of training into movements that help increase mobility, co-ordination, stamina and posture for people with the disease. They saw first-hand how important the classes were for people, particularly in a social context.

“Some of them, it’s what they look forward to, even if they just do it once a week,” Grace says. “They love coming, they love the community, they love the exercise and building their confidence.”

Now KOPD classes are run at CKO, engineered by Grace and Maurice. “It’s obviously not a cure,” Grace says. “We just want to help people with Parkinson’s get moving, feel healthy and improve their quality of life.” 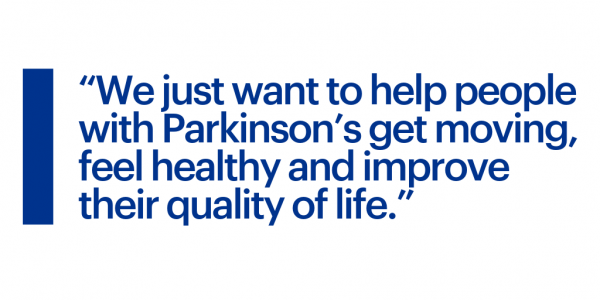 CKO’s program is in its early stages, with classes offered twice a week, but Grace has been amazed by the response. “We had a lady come in and her husband, Ron, has had Parkinson’s for three years,” she says. “The day she walked in, she just cried. She couldn’t believe there was a program out there to improve anything, even just quality of life.

“Even from the first to the second session, Ron’s confidence skyrocketed. We did a video and I realised when I watched it back that he was smiling the whole time. That makes you feel really good.”

Grace and Maurice’s plan is to build a community for people with Parkinson’s and their family and friends. “My first introduction to Parkinson’s was actually Maurice,” Grace says. “I want to see him active for as long as he can be and improve his quality of life. Helping others is just a bonus for me.”